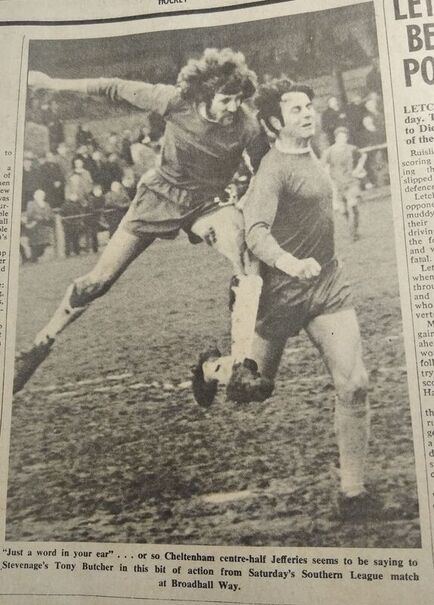 THERE's NOTHING very new to say about Stevenage's latest match, because it was a very familiar story. They didn't deserve to lose, but they lost just the same, writes ALAN WATSON.

In the last few weeks Stevenage have become monotonously predictable. They get on top for long periods of the game, then concede a goal or two against the run of play, and find themselves fighting to salvage a draw from a game they looked like winning.

This was the trouble again on Saturday. Overall, the game was evenly balanced, but after a slow start Stevenage were really getting into their stride until Cheltenham broke away after 33 minutes to go ahead.

Athletic fought back, and equalised seven minutes into the second half. Again, the match seemed to be going their way. But another quick break brought another Cheltenham goal, and Stevenage's renewed efforts could not bring them another equaliser.

Athletic had two basic problems in this match - an attack that couldn't score enough goals, and a defence that gave two away.

Alan Saunders could never really get going on the wing, despite some probing runs from his full back partner Steve Gear. Jose Whishaw had one of his rare off days, contributing little to the attack, and Tony Butcher failed to find his form.

The midfield trio of Chris Long, Charlie West and Keith Hargreaves tried to keep the approach work going, but so much of their work was wasted. At the back, Gear and full-back colleague Peter Hawkins played solidly, as did Ray Dingwall, who was Stevenage's man of the match. Ron Fogg and John Burke, without playing all that badly, both committed errors that cost goals.

Stevenage were certainly worth a point, but they came out of it all with another defeat. It's sad that they must be acquiring a reputation as a team who can help anyone's Southern League promotion bid, because they are so obviously capable of better things.

In the first ten minutes, Town pressed hard for an early goal, and Burke made three good saves to keep them at bay. Then Stevenage started to move.

First, Peacock had to sweep a tricky Butcher header behind for a corner. Then, after 28 minutes, Saunders warded off Whiley to slip the ball inside to Hargreaves. Butcher collected Hargreaves' pass and slammed over a cross-cum-shot that was too far away from the goal and too far in front of the oncoming Whishaw.

And Stevenage hadn't finished yet. Hargreaves was quick to seize on a mistake by Moughton, but he screwed his shot wide of the upright.

Unfortunately, Cheltenham were more lethal when Fogg made his mistake. Holburt snapped up the loose ball, and hit a surprise shot. Burke only half-stopped it, and LEWIS rushed in to tap home a simple chance.

So Stevenage were a goal down at half-time. But within seconds of the restart, West smartly found space to hammer in a shot that keeper Pellant stopped on the line.

Athletic's pressure was broken when Lewis raced away with Holburt in support, but Dingwall was on the spot to get the ball away to safety.

After 52 minutes, Stevenage equalised. After Butcher and West pressurised, the ball ran free across the crowded goal-mouth to HARGREAVES, who slipped in his seventh goal of the season.

Nine minutes later, Athletic worked another dangerous move. Long started it off by playing the ball out to Gear, who made ground before crossing Hargreaves. Saunders darted forward to meet Hargreaves little flick, but Pellant was well out of his goal to scotch the plan.

In the 66th minute, Stevenage won a corner. It was quickly cleared to Casey, who chased up-field. He had to keep the ball, as Holburt was in an offside position ahead of him. Burke bravely came out, but the ball ran loose to COOPER, who popped it into the empty net.

Stevenage kept fighting, and subtitute David Spillane (on for Butcher after 63 minutes) hit a header wide. Then Pellant nearly fumbled a Dingwall effort after the centre-half surged forward on his own.

​The last real chance fell to Long, who took too long over his shot, allowing himself to be crowded off the ball. Good work by Gear and Saunders set up the chance.
Proudly powered by Weebly